HIST: Discussions about the last 4000 years of history, give or take a few days.

Link.
It's no use debating a moron; they drag you down to their level then beat you with experience.

She's in mpressively good shape just like the Indianapolis was too. WW2 era steels and paints seem to hold up a lot better then earlier stuff does on the seafloor.

One little room in a huge ship, but turned into an optimal fuel-air bomb.
"This cult of special forces is as sensible as to form a Royal Corps of Tree Climbers and say that no soldier who does not wear its green hat with a bunch of oak leaves stuck in it should be expected to climb a tree"
— Field Marshal William Slim 1956
Top

Looking at those plans, finding that small room was no easy task, though its proximity to the powder magazines would certainly account for what happened next.

When simple mechanical ventilation failed to clear the air, their chief damage control officer ordered the ventilation system ramped up to full power which only served to spread the explosive vapours throughout the entire ship with predictable results.
It's no use debating a moron; they drag you down to their level then beat you with experience.

The powder magazines were not relevant as the 8in guns and ammunition of both Lexington and Saratoga had been removed on Oahu prior to the battle and were later installed in pairs on the island as coastal batteries. The bomb magazines below the powder-8in spaces though the crew was never certain got flooded; though some flooding was accomplished by dumping fire hoses down the ammunition trunks. In any case they did not explode but rather greatly concerned the ships commanders and eventual decision to abandon the forward and later aft engine spaces. The aft magazines were flooded fairly early on as was a 1000lb bomb handling room in the path of the fire. 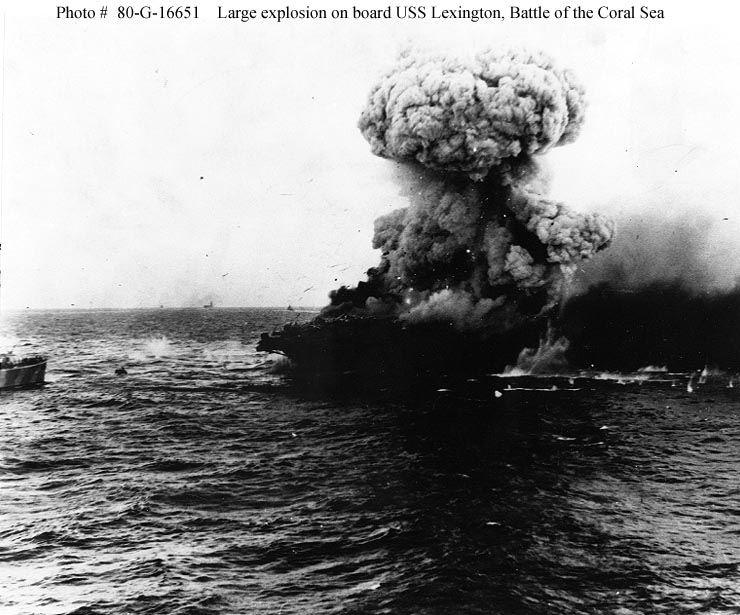 By this point the ship was already abandon with 216 men killed by the attack and followup fire and explosions, but 2,735 saved.
"This cult of special forces is as sensible as to form a Royal Corps of Tree Climbers and say that no soldier who does not wear its green hat with a bunch of oak leaves stuck in it should be expected to climb a tree"
— Field Marshal William Slim 1956
Top

EnterpriseSovereign wrote: ↑2018-03-08 10:45am When simple mechanical ventilation failed to clear the air, their chief damage control officer ordered the ventilation system ramped up to full power which only served to spread the explosive vapours throughout the entire ship with predictable results.

In contrast on Lexington the AVGAS was actually stored inside the TDS proper in many small tanks; flaws with the arrangement of tank voids may have contributed to her leak but this would have been contrary to an existing order, while on US and British fleet carriers designed from the keel up the AVGAS was typically in armored tanks located behind TDS protection.
"This cult of special forces is as sensible as to form a Royal Corps of Tree Climbers and say that no soldier who does not wear its green hat with a bunch of oak leaves stuck in it should be expected to climb a tree"
— Field Marshal William Slim 1956
Top
Post Reply
5 posts • Page 1 of 1