View original artwork, poems, etc. that have been created by this forum's members.

The idea for a short engine tail came from this reference: http://www.theforce.net/swtc/Pix/comics ... iser1b.jpg, where there is a hint of one, though it might just be engine nozzles or other equipment.

Anyway, things are moving very slowly for me in 3d world these days, due to real life getting in the way. Anon1 might not get done for a while, and there's still the corvette, tanker and carrier to finish up (not necessarily in that order).
http://fractalsponge.net
Top

I mean, real life always comes first, so take your time with finishing your current projects

You have already given us plenty to enjoy!
Praying is another way of doing nothing helpful
"Congratulations, you get a cookie. You almost got a fundamental English word correct." Pick
"Outlaw star has spaceships that punch eachother" Joviwan
Read "Tales From The Crossroads"!
Read "One Wrong Turn"!
Top

Picked this up again last night - general hangar setup. Front section for fighters, retrieval bay in the center, transport/troop area in the back. Doors to allow for fighter launch forward or down and out. 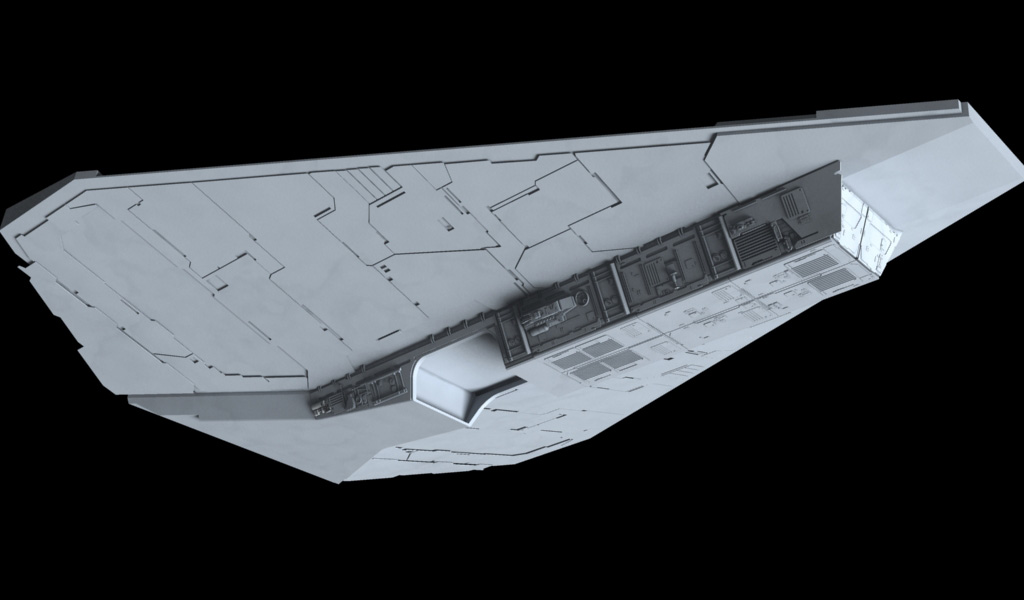 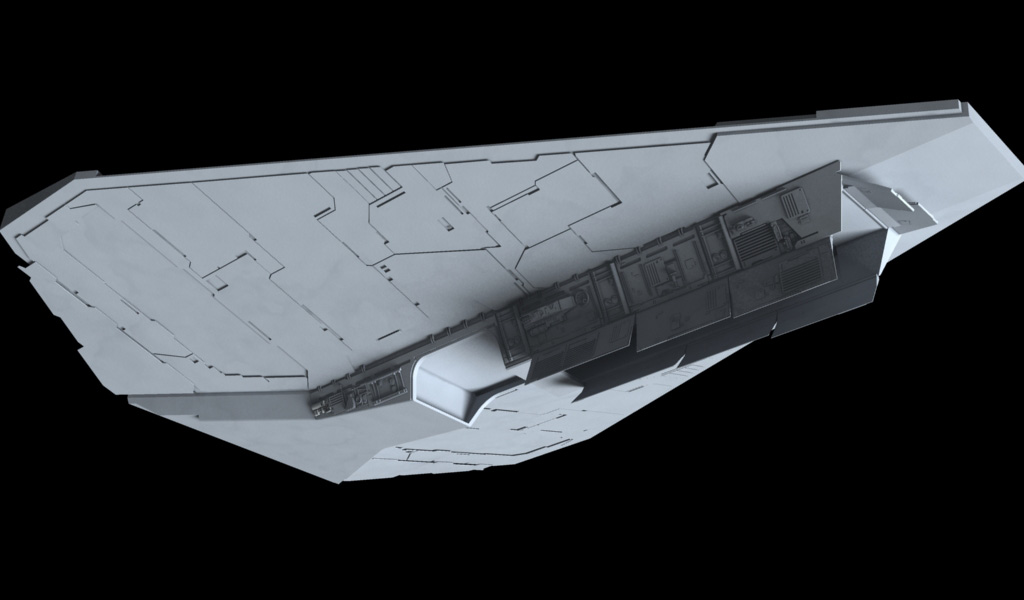 I´ve been meaning to ask...

Would it be possible to get a captain´s-eye-view from some of these ship´s bridges? Due to camera positioning you never really got a good view of how the hulls would look like from the command position.

A desktop image filled with metal mountains of mass murder under your feet would be great for a geeky power trip.

Would it be possible to get a captain´s-eye-view from some of these ship´s bridges? Due to camera positioning you never really got a good view of how the hulls would look like from the command position.

A desktop image filled with metal mountains of mass murder under your feet would be great for a geeky power trip.

Regarding the corvette, there's no reactor bulb planned ? The ventrally opening trapdoors look odd - how about individual canisters for each TIE ? A tractor beam positions the fighter close to the individual rack and a clamp pulls them into the hangar/hull
"In view of the circumstances, Britannia waives the rules."

Can't do canisters and make the whole thing modular with recovery from the back. Right now the idea is that there's a cycling rack system that takes fighters from the recovery area to the launch/servicing areas, and you just swap out the arm arrangements for double-width fighters like the /sa. I'm not planning on actually modeling it at this point, but that's the idea behind the design.

Recovery into individual pods seems like it would be too delicate a procedure, especially given how little space there is - I thought it better to have a large single opening for recovery and multiple openings for either rapid launch or redundancy in case the front doors get damaged, as well as offering a secondary recovery option. That way the whole air group can be cycled in and out quicker and not have as big an impact on ship operations.
http://fractalsponge.net
Top

Thanks for posting those Fractal, rather ""interesting" take on the Dreadnaught. Front looks ok, not so sure about the sloped backside. Still good to see someone else with an interest in the ship

Praying is another way of doing nothing helpful
"Congratulations, you get a cookie. You almost got a fundamental English word correct." Pick
"Outlaw star has spaceships that punch eachother" Joviwan
Read "Tales From The Crossroads"!
Read "One Wrong Turn"!
Top

0:25: That looks suspiciously like a Bellator.
It's Rogue, not Rouge!

Yeah, it's a low-poly model someone made using my renders as reference. The author asked me for permission, so it's all good

Something I've been working on for the past few days: 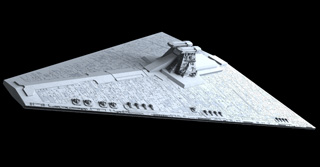 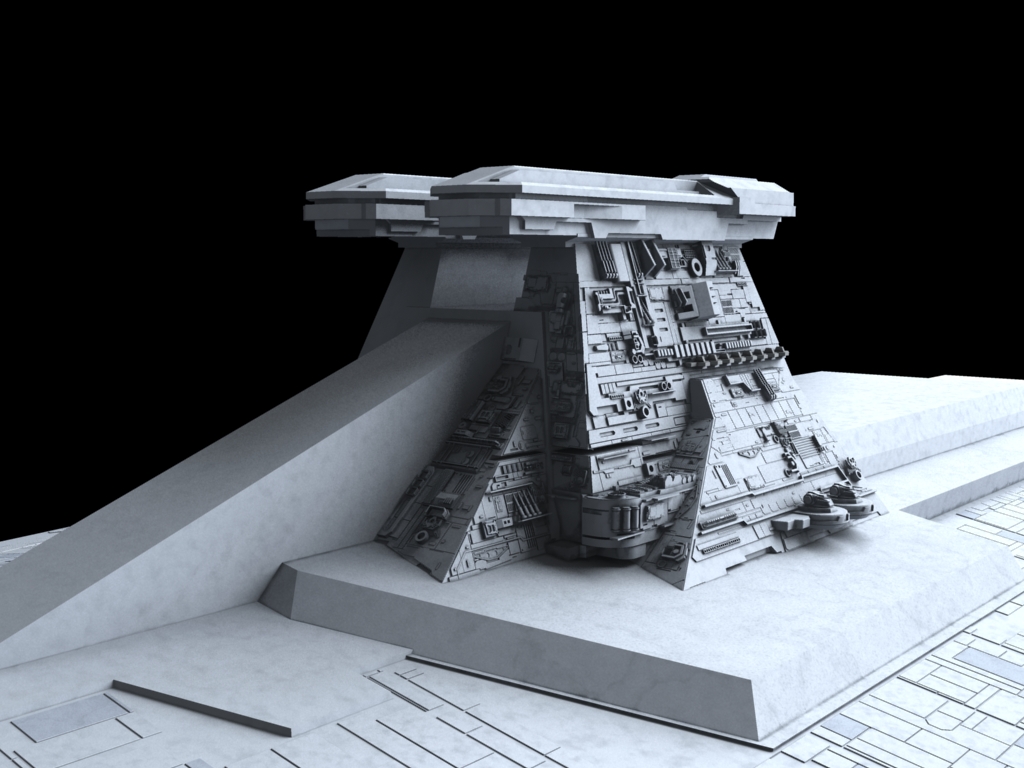 What is it? A Clone Wars-era light cruiser/heavy destroyer? I'm assuming that the bridge tower is the same as the Venator.
Two things are infinite: the universe and human stupidity; and I'm not sure about the universe - Albert Einstein
Top

Wow! That new Venator-style ship is pretty rocking fractal. Keep up the good work!
"Does the walker choose the path, or the path the walker?"
Top

you know, the venator style tower on there gave me the idea that what if that vessel is is some sort of attempt to frankenstein a venator into a heavier weapons platform. take a venator, remove the engines. Now take a victory I and chop the bow off at the hanger bay and remove the bridge superstructure, bisect the victory along its spine and then build hull bridging between those halfs to house a larger reactor and the venators engines. and essentially the proportions match very well, you get the forward hanger bay without any major changes, all of the venators main weapon systems are unaffected both from a power distribution and structural strengthening standpoint. You use the engine support structure to provide the reinforcement for the grafted victory and you can use the new space to supplement reactor and hyperdrive and tie the reactors and power systems though the tail. The weapons systems on the victory I or victory II portion remain intact since you can just saw the ship in half. You compensate for the added mass by placing the venators engines in the gap between the victory engines and the remaining volume can be fitted with additional reactors etc. you maintain the gunnery arcs of all of your weapons except for a few secondaries on the victory.

This also makes the ship significantly smaller than the SWTC estimates, but it works because of the relative scaling to the venator bridges. It is still a tiny ship, around 1/3-1/2 an ISD in volume, but proportionally can mount a reactor that is around 80-90% the size of an ISD's

excuse the kitbash here, but it makes an interesting concept, especially from an origin standpoint

I get the impression the design is meant to both be very fast and from the target profiles be designed to fight in the broadside, possibly with large caliber cannonade type weapons mounted in turrety/barbettes with a similar barrel design to the heavy guns on the upgraded Lucrehulks
Top

I mean, what a strange and interesting formulation you have there good boy!
In truth it COULD work, you would just need to mod the crap out of the venator side of things. The back party looks interesting, but you can almost see the line where you stuck it to the Venator.

If you slimmed the back "wings" to merg into the rest of the superstructure in the back part, got rid of the Venator's command section (which looks silly in the middle now) and made the trench of the back part more similar to the venator part, it might be more passable

Praying is another way of doing nothing helpful
"Congratulations, you get a cookie. You almost got a fundamental English word correct." Pick
"Outlaw star has spaceships that punch eachother" Joviwan
Read "Tales From The Crossroads"!
Read "One Wrong Turn"!
Top

We know most of the ships around byss underwent conversions/modifications during their time in strategic reserve, or as personal vanity ships for high ranking officers. The bridge in the middle is something we just have to deal with, unless anon #3 is really two overlapping ships

The main point is that from a modification perspective the support structure and systems fit, and the general profile works to get pretty close to anon #3

never said it was a finished work :-p
Top crossroads, this honestly looks better, but it doesn't address anon #3 anyway, curious to see how fractal's comes out. Anon#3 has been an annoyance for years.
Top

The last picture is somewhat better,but it still looks like two ships merged together.
If you want to make an upscaled Venator,you gotta start from scratch.
I would love to see more Clone Wars era cruisers and ships.
Top

Hm, well, here's the current layout (starboard side is largely unfinished at present): 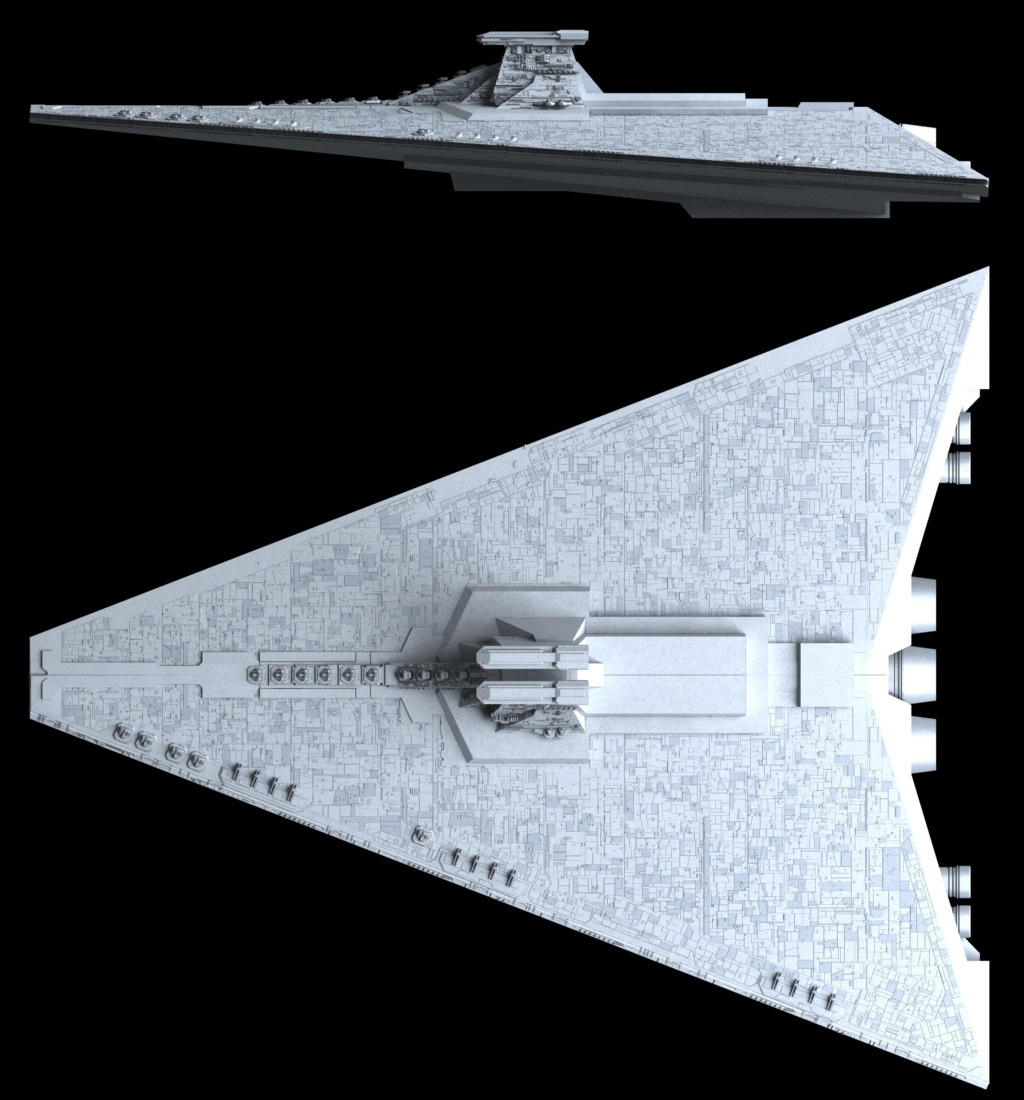 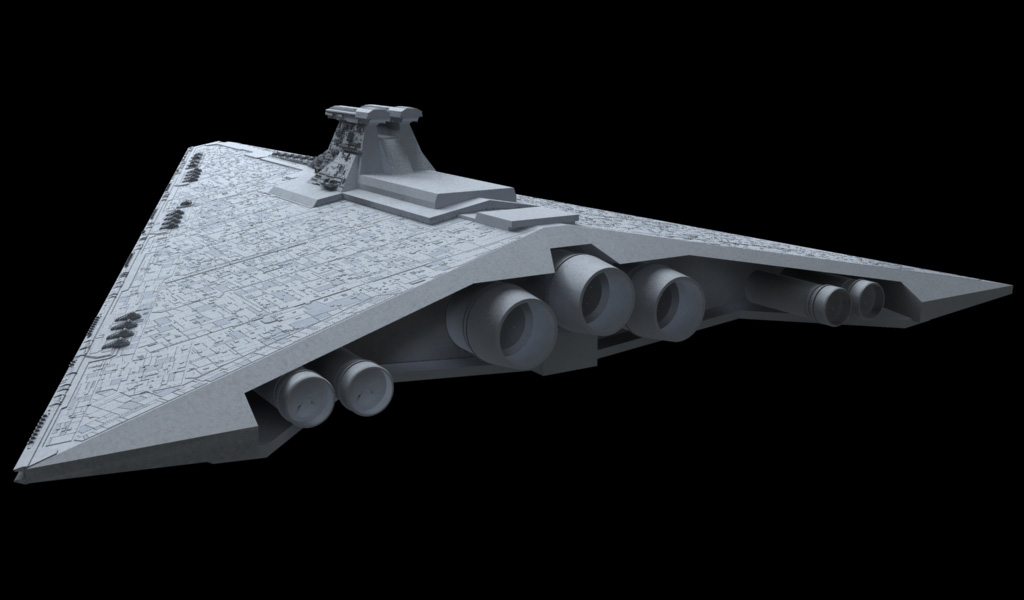 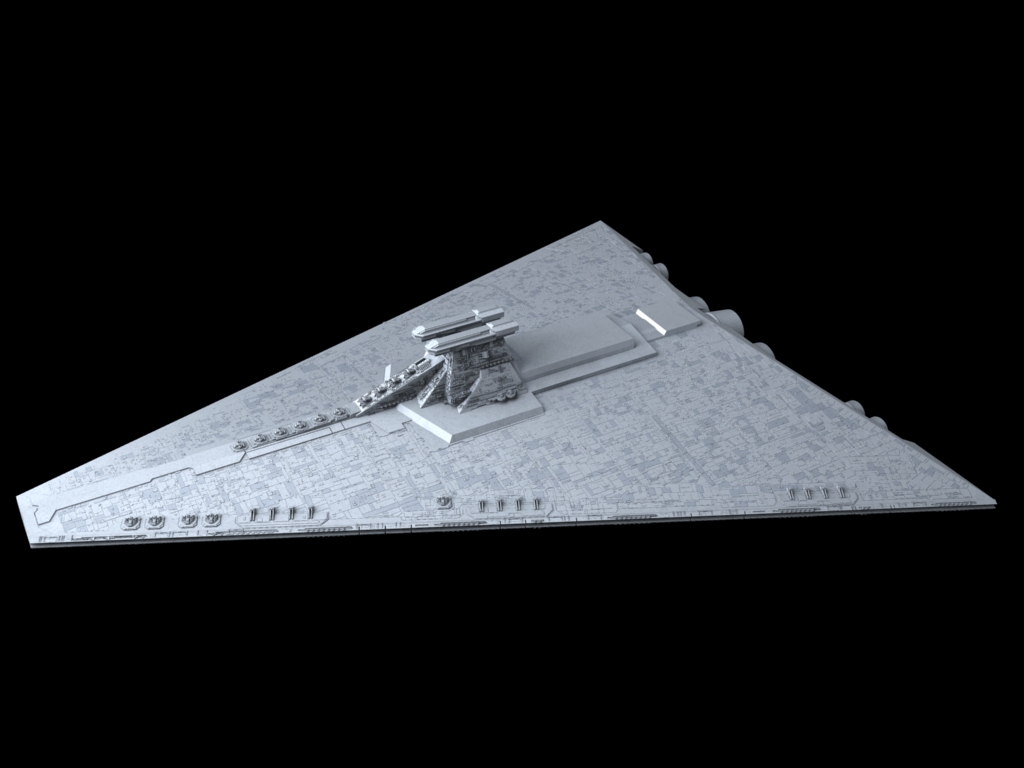 I added the forward Venator-style center spine, which is not on the reference, but I wanted a place to stick a superfiring centerline gun battery. It's not entirely true to the reference or to the Venator (for the tower), chalk it up to indecision or laziness as you will

The original Dark Empire "reference" isn't much to go on:
http://www.theforce.net/swtc/Pix/comics ... royer3.jpg

SWTC suggests swallowtail (there's actually no strong indication from the broadside-on reference), and I took the simpler interpretation of the hull form as indicative of some function, rather than a modified ship. The Venator tower (hilarious really, since Dark Empire was well before anything like a Venator appeared), suggested carrier function. In addition, I was thinking the Venator tower might actually be a standard KDY design feature for ships that need to concentrate C&C for many different types of operations (ship handling, comscan, ground and aerospace wing coordination) in the smallest possible armored volume. (i.e. without extensive terrace sprawl or a big standard hex module); useful in ships built for speed.

So, I started with the notion that it's a swallowtail/chevron. One thing that means is that it's a big but flat ship. The form allows good agility by providing lots of off-axis thrust, and brings the engines aft and out of the way. The wide hull needed for the chevron shape and the out of the way engines means more area for large fighter bays.

All that makes this either a generalist heavy destroyer to back up bayless fleet specialist ships/lead colonial forces or ECR's idea of a pursuit ship (could be both, really).

Hangar placement isn't final yet, but probably two big bays to either side of the ventral spine, lateral launch hangars. Minimal ground contingent for the size, maybe just the standard legion, but backed by a 4-6 wing fighter group.

The thin hull makes reactor placement tricky, so lots of medium sized minor reactors and several main modules (actually 3 Venator main reactor modules + minor reactors) rather than one monolithic central reactor. Sum them all up and it works out to ~2x ISD by power generation. I am following the results of discussion from here: http://bbs.stardestroyer.net/viewtopic. ... &p=3133896 with regards to armament. Currently the plan is to have 5 quad 32/40-teraton barbettes on either dorsal trench brim, 6 down the centerline, and another 4-6 spread around the ventral hull. This is backed by 4x2 70-teraton Venator twins on the center spine, and probably some more ventrally. There will be 4-6 ISDI-caliber heavy ion twin turrets spread around the dorsal hull and ventral centerline as well. 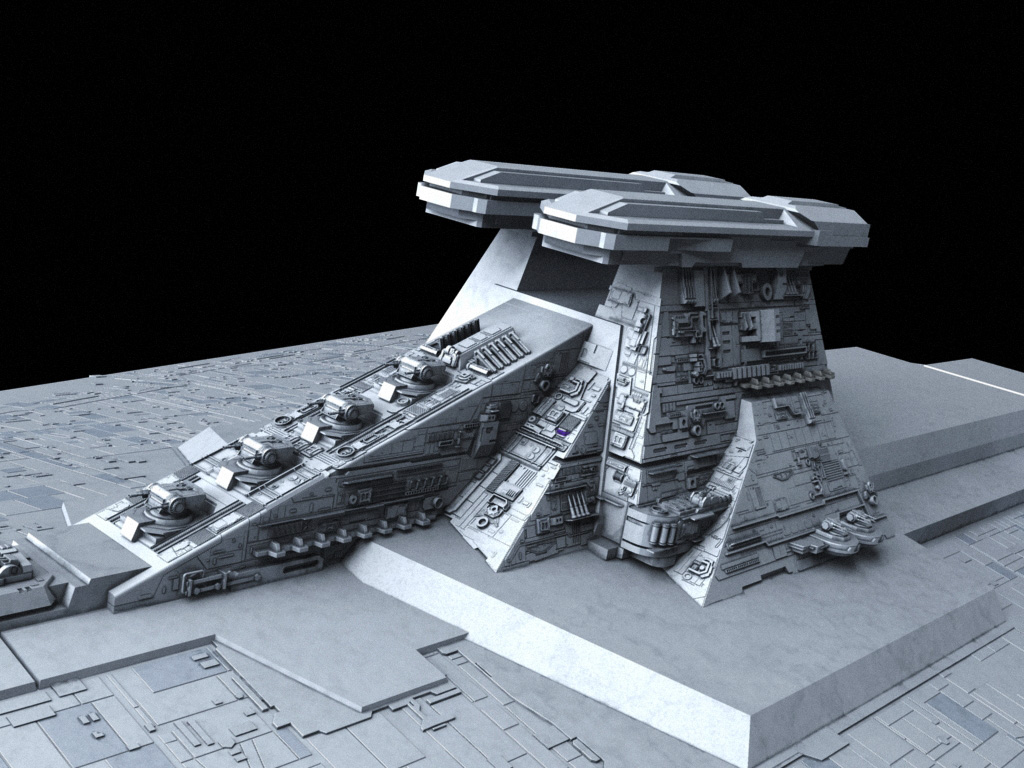 To be honest, I kinda prefer Evillejedi's Anon3 design over yours, Fractal. Visually, Evillejedi's has more of a literal "edge" to it while the other design looks kinda blunt. That's just my personal preference, though.
Top
Post Reply
3880 posts