— Team Mitch (@Team_Mitch) August 3, 2019
His opponent in the 2020 Senate race, Amy McGrath, wasn’t exactly pleased, and she noted that the tweet was posted shortly after a mass shooting in El Paso, Texas.

Hours after the El Paso shooting, Mitch McConnell proudly tweeted this photo. I find it so troubling that our politics have become so nasty and personal that the Senate Majority Leader thinks it's appropriate to use imagery of the death of a political opponent (me) as messaging. pic.twitter.com/2x5kO5jwPi

— Amy McGrath (@AmyMcGrathKY) August 5, 2019
It's symptomatic of what is wrong with our system. I'm fine with the ordinary rough and tumble of politics, but this strikes me as beyond the pale.

— Amy McGrath (@AmyMcGrathKY) August 5, 2019
Kevin Golden, the campaign manager for McConnell, wouldn’t comment when HuffPost asked whether the post was poorly timed. Instead, he said McGrath was being disingenuous in her response to the photo, which he said was based on a political cartoon printed in the Louisville Courier-Journal.

“Our supporters built an homage to the Courier Journal cartoon at Fancy Farm and we posted their work,” he wrote in an email. “Amy McGrath has tweeted this very cartoon several times and it’s shameful that she’s pretending not to know exactly what it is referencing in order to politicize a tragedy.”

This is the cartoon Golden was referring to:

Although I profoundly disagree with a few of these grave stones, this might be my all-time favorite cartoon of the over 600 in my career.
-MM pic.twitter.com/Mx3OOcVWxL

Golden’s comment that McGrath had shown support for the Courier-Journal’s cartoon, however, was itself disingenuous. McGrath retweeted the cartoon to criticize the Senate majority leader’s reaction to it.

ICYMI: before Mitch McConnell gave sick coal miners only 2 minutes of his time, he thought it was funny to tweet about them dying

Ah, of course, it was "homage" to a cartoon mocking McConnell's indifference to all morality and human life.

By the way, here's the original cartoon: 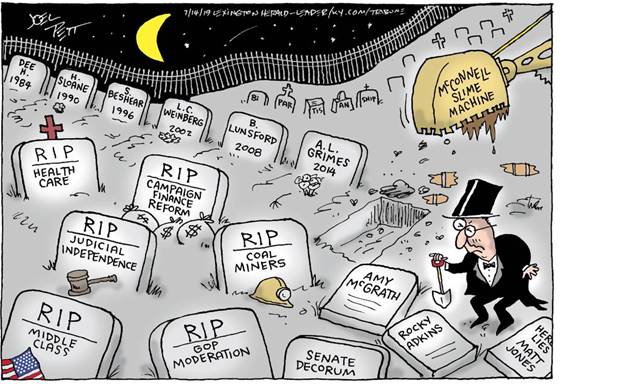 Well, they can make the case that it wasn't meant literally, but given recent events, it is at the very least reckless and irresponsible, not to mention in extremely poor taste, if not a coded attempt to incite murder and terrorism. But what else would we expect from the moral black hole that is Moscow Mitch?
"I know its easy to be defeatist here because nothing has seemingly reigned Trump in so far. But I will say this: every asshole succeeds until finally, they don't. Again, 18 months before he resigned, Nixon had a sky-high approval rating of 67%. Harvey Weinstein was winning Oscars until one day, he definitely wasn't."-John Oliver