Police use mugshots for target practice

Police use mugshots for target practice

This didn't seem to belong in the abuse thread so here it is. Guess which state? yep it's Florida Police Were Caught Using The Worst Possible Pictures for Target Practice


Florida police have some tough questions to answer after a group of National Guardsmen made a galling discovery at a local shooting range.

NBC 6 reports that cops in North Miami Beach were caught using photographs of real people for target practice. All of them were "mug shots of African American men," at least one of which belonged to a suspect that had previously been arrested by the department.

Sgt. Valerie Deant told NBC that she was left "speechless" after finding one of the targets was her brother Woody Deant, who had been arrested and sentenced to four years of jail in 2000 for involvement with a illegal drag race that killed two people. Woody Deant was outraged.

North Miami Beach Police Chief J. Scott Dennis said using real faces was necessary for facial recognition drills and added that "there is no discipline forthcoming" for any officers involved. Chief Dennis added that he was "very, very concerned" about the inclusion of an actual resident of North Miami Beach, but said that the agency used similar sheets of all-Hispanic or all-white targets.

"The use of those targets doesn't seem correct," retired FBI agent Alex Vasquez told NBC. "The police have different options for targets. I think the police have to be extra careful and sensitive to some issues that might be raised." 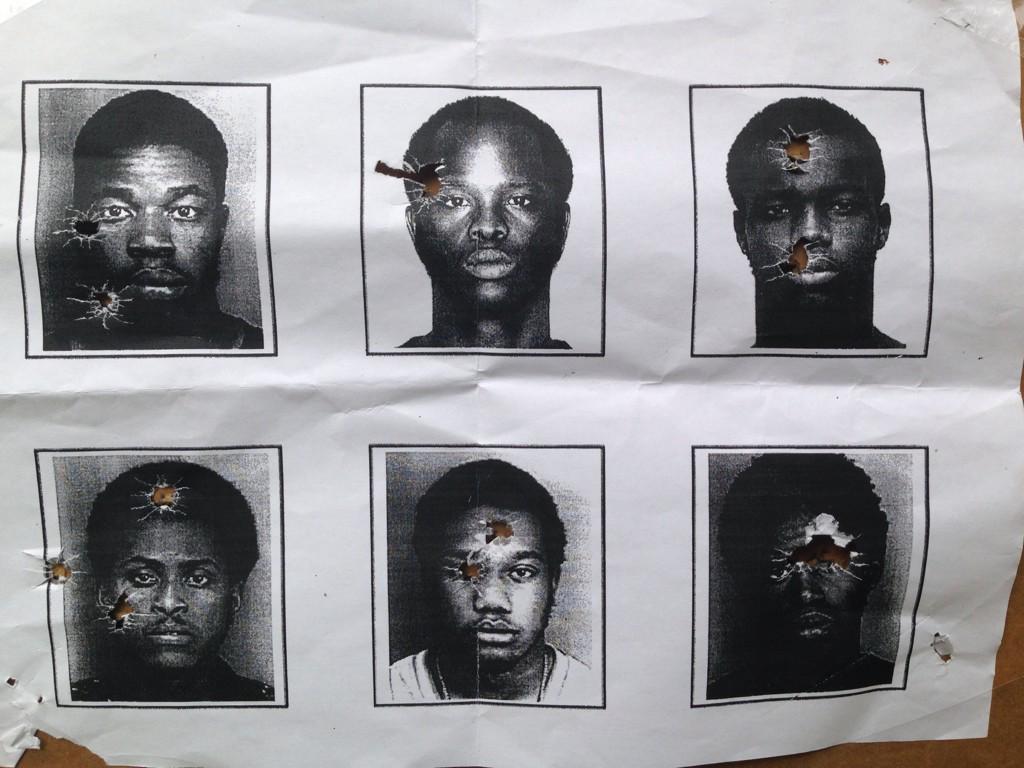 North Miami Beach Police Chief J. Scott Dennis said using real faces was necessary for facial recognition drills and added that "there is no discipline forthcoming" for any officers involved.

Of course not. Anybody taking bets on what would happen if a normal citizen would do the same thing with residents of his city?

Especially worrying because these are snipers.
Whoever says "education does not matter" can try ignorance
------------
A decision must be made in the life of every nation at the very moment when the grasp of the enemy is at its throat. Then, it seems that the only way to survive is to use the means of the enemy, to rest survival upon what is expedient, to look the other way. Well, the answer to that is 'survival as what'? A country isn't a rock. It's not an extension of one's self. It's what it stands for. It's what it stands for when standing for something is the most difficult! - Chief Judge Haywood
------------
My LPs
Top

Honestly, less worrying when they're snipers, because police snipers usually don't fire except under conditions that are carefully planned out ahead of time. Hostage situations, for example, where the identity of the target is (usually) known and there's plenty of time to scope out the situation.

There is a (stupid and bad and wrong and excessive and evil) risk introduced that said snipers will reflexively shoot the wrong person, a black person if the majority of these faces being used for target practice are in fact black.

But even so, I'm more worried about the idea of beat cops doing the same thing. They're the ones more likely to rapidly draw a pistol and shoot someone dead for taking out his cell phone, or standing in the 'wrong' place, or lowering their hands instead of raising them.
This space dedicated to Vasily Arkhipov
Top

It does make sense to have snipers shoot at a series of photos that all look basically the same, for he must be able to find the face he is looking for. So in training, he has a set of 6 targets, and was instructed to find and shoot person X. If they are all completely different, it's too easy.

It was stated they do have the same cards for other races, which makes perfect sense in this context.
A minute's thought suggests that the very idea of this is stupid. A more detailed examination raises the possibility that it might be an answer to the question "how could the Germans win the war after the US gets involved?" - Captain Seafort, in a thread proposing a 1942 'D-Day' in Quiberon Bay

So what is being done here, in theory, is to avert the idea that the sniper is told to shoot "this guy" and instead shoots that guy, and says "crap, sorry, they all look alike from five hundred yards with a telescope."

Still, there's a considerable creep factor there, and it would be a lot more appropriate for the police department to at least ask permission.
This space dedicated to Vasily Arkhipov
Top

what it looks like is that they wanted to cheap out on buying the targets used by agencies everywhere else for the facial recognition drills and just used file photos from their mug shots. Plain white stock paper is so much cheaper than buying those targets.
"War.... it's faaaaaantastic!" <--- Hot Shots:Part Duex
"Psychos don't explode when sunlight hits them, I don't care how fucking crazy they are!"~ Seth from Dusk Till Dawn
|BotM|Justice League's Lethal Protector
Top

Yeah, I'm going to agree with DFTS for officially the first time ever and call stupidity instead of malice on this one. They dug up a bunch of mug shots of a guy who got arrested a lot, used them for a free face-recognition drill, and got called out on it by the guy, who has since turned his life around, because insulting and kind of dangerous to him personally.
"Do I really look like a guy with a plan? Y'know what I am? I'm a dog chasing cars. I wouldn't know what to do with one if I caught it! Y'know, I just do things..." --The Joker
Top
Post Reply
7 posts • Page 1 of 1