The Mandalorian: A Vergence in the Force (fan film)

The Mandalorian: A Vergence in the Force (fan film) 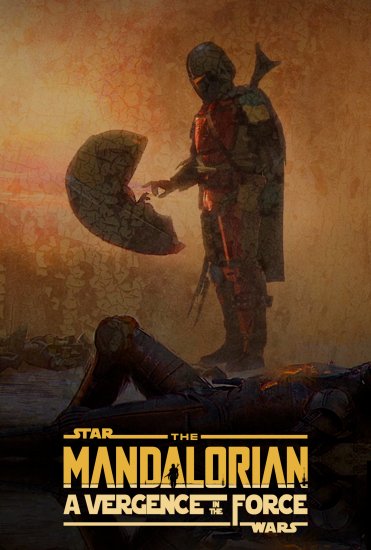 There is one Fan Editor who stands out above all others, who goes by the name of Smudger9. His first major foray into the SW fan editing world was not chopping up the existing movies, but re-editing footage from The Clone Wars TV series into full-length films done in the style of Star Wars. The editing feels like a real Star Wars movie, complete with the fanfare and opening crawl at the beginning. The cheesy narrations are removed and the kiddie parts have been edited out to give The Clone Wars a more cinematic and serious feel (as much as they can for a show that was aimed at kids). He picked the best story arcs to string together into films and the final result is amazing.

He made it up to Episode V before his disk drive died and with it the future installments of The Clone Wars Saga. He took a break from editing after that since his heart wasn't in it after having lost alot of precious data and work. But then The Mandalorian arrived on the scene and he's once again worked his magic to turn a TV series into a cinematic masterpiece. Just like The Clone Wars, we get the traditional Star Wars opening, the same slick editing, tight pacing, etc. I largely admire what he did, managing to take the best and most important parts and weaving them seamlessly together into a cohesive story while skipping much of the fluff and filler. It is seriously badass.

You can find information here at OriginalTrilogy.com, where he gives a complete list of the edits/changes implemented. The download links he posted at Vimeo are not working anymore due to the Imperial Copyright Extermination Squad of the Disney Empire, but I managed to find other ways to get this.

One thing I didn't like about Smudger's edit is that the classic 20th Century Fox logo was replaced with the Star Wars heads from the TV version…also when that fades out, you can catch a couple of frames of “STAR WARS” written horizontally just starting to fade in before it switches to the Lucasfilm logo.

For my own personal copy of this movie, I redid the opening by putting the 20th Century Fox logo back in like a classic Star Wars movie. I found this version of it on Youtube (IIRC, I think this is what they used for The Force Awakens), but then I used another Lucasfilm Ltd. logo without the “A Disney Company” underneath because it’s redundant to see it a second time. The music sounded a little off to me, so I used the audio from the 2005 ROTS version of the fanfare. I sliced off the THX part and substituted it with the fanedit.org disclaimer at the beginning.

I have a lower quality version of the file hosted online so anyone who wants to see it can check it out: Link
Top

Reading the edit list in there, removing all the Jawa scenes from the second episode but leaving in the mudhorn doesn't make a lot of sense; if he doesn't need to fight it, why is he fighting it?
It's Rogue, not Rouge!

It explains Mando's suit being banged up before the new armor forging scene later on. The Mudhorn becomes his sigil or whatever the Armorer called it.
Top

It explains Mando's suit being banged up before the new armor forging scene later on. The Mudhorn becomes his sigil or whatever the Armorer called it.

It does explain that, yes, but why is he landing on that planet to go fight a mudhorn for no reason? Taking out the Jawas removes the motivation, that's what I'm saying.
It's Rogue, not Rouge!

It's the same planet. The way it's edited, it looks like the mudhorn attack is a random encounter.
Top
Post Reply
6 posts • Page 1 of 1