View original artwork, poems, etc. that have been created by this forum's members.

yes but that's a biped. it's like a AT-AT scale AT-ST.
If a black-hawk flies over a light show and is not harmed, does that make it immune to lasers?
Top

Bigger than an AT-AT, actually. No more walkers for a bit I think; superheavy walkers has the distinct potential to be ridiculous looking, unless very carefully done - but I have a big ship bug right now, so running with it. And what official AT-AT variants are there? I am not doing a stupid swimming gimped AT-AT :p.

Measurements later, but I did scale down from the original renders (now 75% the size). Again, the Procursator is 1.2km. This is today's work:

Not the image I had in my head, but I guess that's why I'm not a shipwright. Masterstroke!
Top

So I just found this thread -THANKS Phong for telling me- and just...wow.

I may have something of a SW crossover fanfic sort of on the horizon at some undetermined time in the future...is there any possibility I might use your designs in it? Because its just so perfectly suited....

Keep up the awesome work. 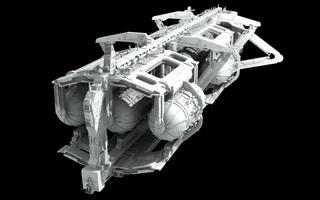 Are those Death Star-like turbolaserturrets on the back of the tanker ?

Your tanker served as the inspiration for an adventure for my group, the rebels need fuel and have to capture an imperial supply vessel to get it. If you continue to work on SW ships in a quality like that, Wizards of the Coast should contact you to illustrate ships from their sourcebooks

Nice work with the tanker. Do you have any views of the tanker's fuel booms connected to the receiving ship(s)? I'd be interested what that interface looks like.

^They're just undetailed tubes right now - partly that's me being lazy, and party it's the Bellator not having been designed with obvious refueling ports in mind. There's a reason why I've hidden the docking largely behind the hull in that squadron pic

Right now, thinking about using the void space above the hangar bays on the tanker as a mobile dock for frigate-sized ships. The lower voids can be field container storage for spares and supplies, etc. Will get to that eventually.

Starting to think about Giel's battleship. Only vague scaling cues available, but I'm envisioning putting it at about 7.5km long, probably twice the beam of the Bellator. Not nearly as fast, but a third more firepower output, and obviously tougher. I think a Bellator might be worth a quarter to a fifth of an Executor's power, and this to be about a third. I might do the carrier variant first though, which at least has hangars to stave off the boredom of massive expanses of armor.

All this will probably have to wait for a while though - got a thesis defense and a move coming up.
http://fractalsponge.net
Top

I'm rather inpressed by that, and strangely, the image in my head ended up matching you design (though I though of the tanks as being spherical). Also, I like your angle on the Mandator. I have a friend who would be excited about it, though his own numbers would likely have to change.

What is Project Zohar?

fractalsponge1 wrote:^They're just undetailed tubes right now - partly that's me being lazy, and party it's the Bellator not having been designed with obvious refueling ports in mind. There's a reason why I've hidden the docking largely behind the hull in that squadron pic

I figured they weren't done, but I'm sure you can find a pre-exisiting panel somewhere on the hull in the general area that could conveniently slide open and reveal the fuel boom receptacle!

wouldn't it be better to have them refuel on the ventral side? some around the reactor bulb itself, or maybe the tip of the dome.
If a black-hawk flies over a light show and is not harmed, does that make it immune to lasers?
Top

If the acclamator is any indication, the fuel silos are quite separate from the main reactor complex. Why would you refuel a reactor directly? At the very least that would reduce the amount of space available for the power generating component of the reactor itself in the bulb.
http://fractalsponge.net
Top

Excellent work. The amount of detail you cram onto those ships is ludicrous. If I may, I'd like to second something from earlier in the thread:


Raesene wrote:A picture request: I'd love a view from a main bridge window forward when your Warrior is finished. I need a new wallpaper and would like something like Vader's view when the fleet assembles in ESB

That would be awesome.
Top

So quick question - what would happen or how would it look if the main light source for the pictures were only on the ships? so, no external lightsource, I mean.

A field of small dots, and the engine flares. Not much self-lighting coming from this.

Anyways, I have sorted out the tertiary armament on the Bellator, starting with actually modeling a low-poly medium turbolaser turret - the new one can be seen on the left, and the old one on the right. About 450 polys per mount. 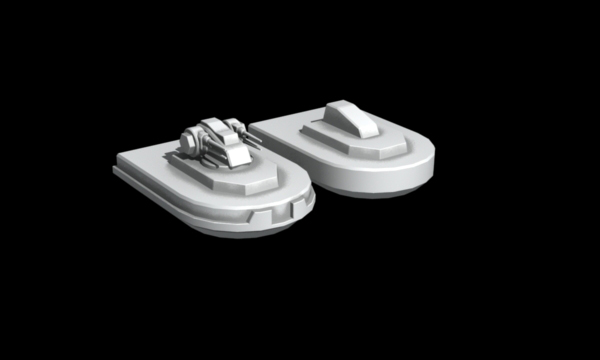 Also, still putting some more thought into rationalizing the main armament given the actual combined reactor size, and scaling up to something that could genuinely be considered within Star Battleship class.

Total reactor output, scaled from the ISD by volume, is about 79 petatons per second, annihilating 3.7 million tons of hypermatter per second.

I'm thinking of the following distribution:

The large turbolasers will be 720-teraton superheavies. I have also added 3 new turrets in some of the obvious remaining positions, for a total of 16 twin turrets. The barrel size is pretty massive in comparison to the 175s on the ISDI - but I don't know how big I really want to push these... Scaling down, the quads would mount 4x240-teraton turbolasers. The quad turrets have a 42m barbette diameter, compared to 30m for the octuples. Of course, the octuple is a very small turret, which if it mounted the same power as a twin could fit to a ~20m diameter barbette. Assuming the guns are in the 32-40 teraton range, the mounting size is sufficient for up to a 320 teraton power supply an all the associated equipment that is associated. A 42m turret that is substantially bulkier I can see taking up to 4 320s on that count. However, that might be stretching it considering the barrel size currently, and I don't really want this to be/look overarmed. 240-teraton turbolasers it is. The quad ion ball turrets I judge as equivalent to the twin superheavies, so make the heavy ion cannon equivalent to 320-teraton turbolasers. Octuples to remain 40-teraton caliber weapons. Also added 288 tactical missile tubes (not the big strategic tube weapons) in 24-round launchers.

This setup would allow the Bellator to power all the weapons (including the heavy ions) that can bear in the primary arc (forward/dorsal), and still have 8% power reserve, or fire every turbolaser in every arc once per second, but leaving the ions with a trickle. The ship would be unable to power her full armament to cover every direction without capacitor power. Given the likely engagement profile I see this ship adopting - high acceleration at the fleet flanks, dodging fire from the enemy battleline but concentrating fire from its prime arc on large targets in the battleship/dreadnaught scales, this should be fine; maximum concentration of fire that leaves enough thrust in hand to dodge a volley from, say, an executor.
Last edited by fractalsponge1 on 2008-10-20 05:43pm, edited 1 time in total.
http://fractalsponge.net
Top

Mandator looks good, but I (and I think many other readers of "Hull no 721" would love to see a Black Prince-mod of the stock Star Destroyer.
"In view of the circumstances, Britannia waives the rules."

Well, at that scale point, I'm more likely to do an Allegiance or Tector.

The Black Prince mod from the standard ISD I'm not actually so sure about visually. My model is already ISDI mod2 conversion essentially, as it uses an ISDI hull and ISDII superstructure and armament. The tricky part will be the exact size and shape of the hull extensions, and I'm not really certain about this third sensor globe and half-black superstructure business

. Plus I'd not likely do it unless remnant gives me a lot of input on the design - his baby after all.
http://fractalsponge.net
Top

What about the Vengeance or another similar sized battlecruiser?

Something in between the Bellator and the Dreadnoughts.
Top

Well here's the list of potential non-fighter ships (i.e. things I actually want to do at some point):

Not sure what will be next. Going to be exceedingly busy for a while, so it might not start for a while, but there will be something out of that list I think.
http://fractalsponge.net
Top

Put my vote in for the Carrack. It's always been one of my favorite ships.

Vendetta wrote:Richard Gatling was a pioneer in US national healthcare. On discovering that most soldiers during the American Civil War were dying of disease rather than gunshots, he turned his mind to, rather than providing better sanitary conditions and medical care for troops, creating a machine to make sure they got shot faster.

Wow, anyone who asked for shots for wallpaper, fractalsponge1 has provided above. The first one I clicked on practically poked a hole in the side of my monitor.

Shame to have to scale it down just to fit on the screen!

HIMS Black Prince would be an utter nightmare, I'd think. Even if you knew precisely what it looked like, it would be an extremely busy design.

A little doodle from today.

that be more then a days work for me if I ever could make anything like that.
I may be an idiot, but I'm a tolerated idiot
"I think you completely missed the point of sigs. They're supposed to be completely homegrown in the fertile hydroponics lab of your mind, dried in your closet, rolled, and smoked...
Oh wait, that's marijuana..."Einhander Sn0m4n
Top
Post Reply
3879 posts