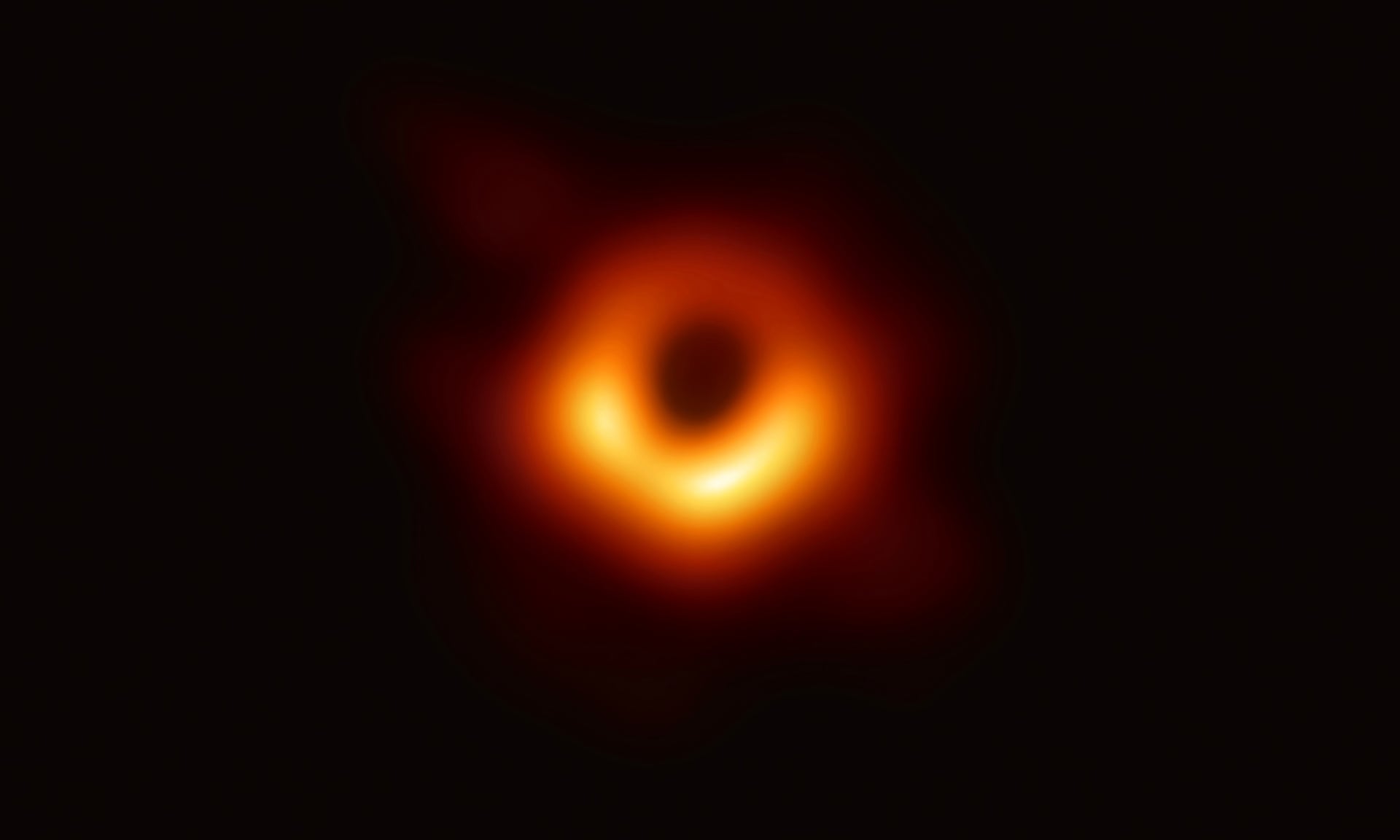 It's kind of blurry, but that's probably understandable given the sheer resolution needed to capture it in the first place. That's a pretty accretion disc.

The image of a black hole captured by the Event Horizon Telescope.

Astronomers have captured the first image of a black hole, heralding a revolution in our understanding of the universe’s most enigmatic objects.

The picture shows a halo of dust and gas, tracing the outline of a colossal black hole, at the heart of the Messier 87 galaxy, 55m light years from Earth.

The black hole itself – a cosmic trapdoor from which neither light nor matter can escape – is unseeable. But the latest observations take astronomers right to its threshold for the first time, illuminating the event horizon beyond which all known physical laws collapse.


The breakthrough image was captured by the Event Horizon Telescope (EHT), a network of eight radio telescopes spanning locations from Antarctica to Spain and Chile, in an effort involving more than 200 scientists.

Sheperd Doeleman, EHT director and Harvard University senior research fellow said: “Black holes are the most mysterious objects in the universe. We have seen what we thought was unseeable. We have taken a picture of a black hole.”

France Córdova, director of the US National Science Foundation and an astrophysicist, said that the image, which she had only seen as it was unveiled at the press briefing she was chairing, had brought tears to her eyes. “We have been studying black holes for so long that sometimes it’s easy to forget that none of us has seen one,” she said. “This will leave an imprint on people’s memories.”


The image gives the first direct glimpse of a black hole’s accretion disc, a fuzzy doughnut-shaped ring of gas and dust that steadily “feeds” the monster within.

The EHT picks up radiation emitted by particles within the disc that are heated to billions of degrees as they swirl around the black hole at close to the speed of light, before vanishing down the plughole.

The halo’s crescent-like appearance in the image is because the particles in the side of the disc rotating towards Earth are flung towards us faster and so appear brighter. The dark shadow within marks the edge of the event horizon, the point of no return, beyond which no light or matter can travel fast enough to escape the inexorable gravitational pull of the black hole.

Black holes were first predicted by Einstein’s theory of relativity – although Einstein himself was sceptical that they actually existed. Since then, astronomers have accumulated overwhelming evidence that these cosmic sinkholes are out there, including recent detection of gravitational waves that ripple across the cosmos when pairs of them collide.

But black holes are so small, dark and distant that observing them directly requires a telescope with a resolution equivalent to being able to see a bagel on the moon. This was once thought to be an insurmountable challenge.

The EHT achieved the necessary firepower by combining data from eight of the world’s leading radio observatories, including the Atacama Large Millimetre Array (Alma) in Chile and the South Pole Telescope, creating an effective telescope the size of the Earth.

When observations were launched in 2017, the EHT had two primary targets. First was Sagittarius A*, the black hole at the centre of the Milky Way, which has a mass of about 4m suns. The second target, which yielded the image, was a supermassive black hole in the galaxy M87, into which the equivalent of 6bn suns of light and matter has disappeared.

The collaboration is still working on producing an image of the Milky Way’s black hole. “We hope to get that very soon,” said Doeleman.

The success of the project hinged on clear skies on several continents simultaneously and exquisite coordination between the eight far-flung teams. Observations at the different sites were coordinated using atomic clocks, called hydrogen masers, accurate to within one second every 100 million years. And, on one night in April 2017, everything came together. “We got super lucky, the weather was perfect,” said Ziri Younsi, a member of the EHT collaboration who is based at University College London.

The sheer volume of data generated was also unprecedented – in one night the EHT generated as much data as the Large Hadron Collider does in a year. This meant waiting for half a year for the South Pole data, which could only be shipped out at the end of Antarctic winter.

The observations are already giving scientists new insights into the weird environment close to black holes, where gravity is so fierce that reality as we know it is distorted beyond recognition.

At the event horizon, light is bent in a perfect loop around the black hole, meaning if you stood there you would be able to see the back of your own head. The observations also provide one of the most stringent tests to date of Einstein’s theory of general relativity: this predicts a rounded shape of the black hole’s halo, in line with what EHT has observed.

Scientists are also hoping to understand more about the origin of jets of radiation that are blasted out from the poles of some black holes at close to the speed of light, creating brilliant beacons that can be picked out across the cosmos.

However, the observations do not yet reveal anything about the black hole’s inscrutable interior.

Heino Falcke, chair of the EHT science council, who is based at Radboud University in the Netherlands, said: “The big question for me is whether we’ll ever be able to transcend that limit. The answer may be maybe not. That’s frustrating but we’ll have to accept it.”

Reaver225 wrote: ↑
2019-04-10 12:19pm
It's kind of blurry, but that's probably understandable given the sheer resolution needed to capture it in the first place. That's a pretty accretion disc.

I'll say! It reminds me of a glazed doughnut.

With that said it looks like general relativity holds up once again, a theory of everything still needs to wait.

This user is more interested in the sky than your voice.

XKCD did a size comparison between the black hole and our solar system. Just so you have a sense of scale.
Top

Reaver225 wrote: ↑
2019-04-10 12:19pm
It's kind of blurry, but that's probably understandable given the sheer resolution needed to capture it in the first place. That's a pretty accretion disc.

I'll say! It reminds me of a glazed doughnut.

With that said it looks like general relativity holds up once again, a theory of everything still needs to wait.

Science keeps racking up the wins, I see. This isn't quite as awesome as the KT extinction fossil site, at least to me, but its a pretty close second.
"I know its easy to be defeatist here because nothing has seemingly reigned Trump in so far. But I will say this: every asshole succeeds until finally, they don't. Again, 18 months before he resigned, Nixon had a sky-high approval rating of 67%. Harvey Weinstein was winning Oscars until one day, he definitely wasn't."-John Oliver

I SUPPORT A NATIONAL GENERAL STRIKE TO REMOVE TRUMP FROM OFFICE.
Top

This is honestly somthing I never thought we'd manage to see - and from so far away as well (~54 million light years). Makes me wonder what Sag A* will look like at only ~40,000 light years - that was their other target.
Baltar: "I don't want to miss a moment of the last Battlestar's destruction!"
Centurion: "Sir, I really think you should look at the other Battlestar."
Baltar: "What are you babbling about other...it's impossible!"
Centurion: "No. It is a Battlestar."

Corrax Entry 7:17: So you walk eternally through the shadow realms, standing against evil where all others falter. May your thirst for retribution never quench, may the blood on your sword never dry, and may we never need you again.
Top

Per the official paper:


Another primary EHT source, Sgr A*, has a precisely measured mass three orders of magnitude smaller than that of M87*, with dynamical timescales of minutes instead of days. Observing the shadow of Sgr A* will require accounting for this variability and mitigation of scattering effects caused by the interstellar medium

So it'll probably have about the same resolution as the M87 picture.
This user is more interested in the sky than your voice.

I'm very please that the picture is actually rather close (all things considered) to the CGI Black hole from Interstellar.

Score another one for Science and Math on that too.
\
Top

Solauren wrote: ↑
2019-04-11 05:37pm
I'm very please that the picture is actually rather close (all things considered) to the CGI Black hole from Interstellar.

Remember that the CGI people working on Interstellar asked the opinion of some astrophysicists before finalising their SFX shots. The results of the computer simulations were a surprise to pretty much everyone — they were expecting the usual accretion disc effect.
“Despite rumor, Death isn't cruel — merely terribly, terribly good at his job.”
Terry Pratchett, Sourcery
Top
Post Reply
8 posts • Page 1 of 1

Return to “Science, Logic, And Morality”