The Indian monsoon has been pretty damn stable since rigorous records began back in 1870. But looking at studies using Himalayan ice cores, tree rings and other caves have detected protracted droughts. wait caves?


To reconstruct past variations in rainfall, we analyzed stalagmites from Mawmluh cave, near the town of Cherrapunji in the state of Meghalaya – one of the wettest locations in the world.

Stalagmites are conelike structures that grow slowly from the ground up, typically at a rate of about one millimeter every 10 years. Trapped within their growth layers are minute amounts of uranium and other elements that were acquired as rainwater infiltrated the rocks and soil above the cave. Over time, uranium trapped in stalagmites decays into thorium at a predictable pace, so we can figure out the age of each stalagmite growth layer by measuring the ratio of uranium to thorium.

The oxygen in rainwater molecules comes in two primary types of isotopes – heavy and light. As stalagmites grow, they lock into their structure the oxygen isotope ratios of the percolating rainwater that seeps into the cave. Subtle variations in this ratio can arise from a range of climatic conditions. Our previous research in this area showed that variations in oxygen isotope ratios in rainwater, and consequently, in stalagmites, track changes in the relative abundance of different moisture sources that contribute to summer monsoon rainfall.

During years when monsoon circulation is weak, rainfall here is primarily derived from the moisture that evaporated from the nearby Arabian Sea. During strong monsoon years, however, atmospheric circulation brings copious amounts of moisture to this area all the way from the southern Indian Ocean.

The two moisture sources have quite different oxygen isotope signatures, and this ratio is faithfully preserved in the stalagmites. We can use this clue to learn about the overall strength of the monsoon intensity at the time the stalagmite formed. We pieced together the monsoon rainfall history by extracting minute amounts of calcium carbonate from its growth rings and then measuring the oxygen isotope ratios. To anchor our climate record to precise calendar years, we measured the uranium and thorium ratio. 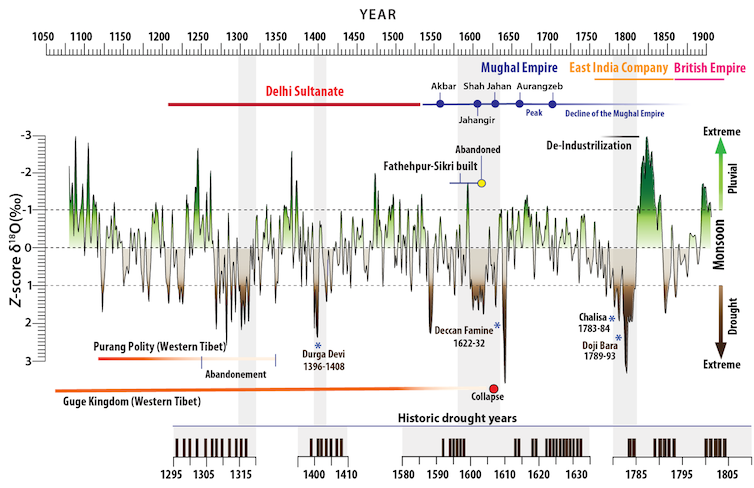 Return to “Science, Logic, And Morality”