[Bakustra] From the moral nihilism thread

Only now, at the end, do you understand.

[Bakustra] From the moral nihilism thread

From the moral nihilism thread in SLAM


Bakustra wrote:Why are you avoiding the question? It's like you're deliberately interpreting everything I say in such a way as to make you look good. Let me rephrase this for you so that it will be slightly harder for you to wriggle out again, and we can either keep doing this until I qualify for a J.D. in contract law or you just answer the fucking question.

Moi, as amended wrote:So, you're finally advocating the simple position that morality is solely a function of what better equips a society of humans to survive or not. Well, group selection is a minority position within biology, but I am not a biologist and so will accept that for now. So, what determines which system of ethics is the most fit in an evolutionary sense for humans? How did you distinguish that the moral system you advocate is superior for humans?

I am really getting tired of your fucking misrepresentations, asshole. There are whole pages earlier in this thread where I repeatedly try to explain that we don't know in advance what's superior; we learn what works through experience. I even gave numerous examples, yet you are now pretending that I never explained any of this, and you're accusing me of "dodging". Without exception, every one of your posts contains some glaring misrepresentation or other.


I love the way you try to sound reasonable while still hopelessly mangling the concept. Are you really this dense? That's the whole point of group advantage-based ethics (or any system of ethics which is based on a goal rather than a set of "self-evident" rules): you can't absolutely nail down what necessarily works best. You have to try things and see. It's entirely possible that there is more than one system which works equally well, or that a system which works well at one stage of societal development does not work so well at another. And yes, that opens up the door for "moral debate", which is a good thing, because it means that the system is flexible and can adapt to changing conditions, unlike hard-coded rule-based systems (which most other systems are).

So why are you advocating a particular system, then? What makes it possible for you to reject the anarchist ethics I proposed, which are "rule-based" in the same way that utilitarianism is, in favor of your particular system, which you have espoused earlier in this thread? Are you abandoning that espousal?

We know from experience that anarchist ethics don't work, moron. What part of "we use what works" do you not understand?


PS: Deontological systems are in fact capable of flexibility, so you're still injecting your personal distaste into this argument and you don't even know what virtue ethics are.

Any ethical system which is not willing to acknowledge the necessity of coercion is a waste of time.


The other is that what is best for the individuals who make up a society is not the best for that society, and so that opens up the door for individual morality, as following societal morality is not the best option for the individual. Even within the framework of group selection (which is generally thought of as bullshit or at best of limited applicability), your argument fails. EDIT: The third is that we cannot derive any sort of societal morality from early codes of law, which just puts us in the position of arguing without evidence- or the mythology of evolutionary psychology.

If you reject the concept of evolutionary group selection, then you reject the concept of evolution. If you're so stupid that you can't figure out why Stone Age tribes which could not co-operate would inevitably be out-competed by Stone Age tribes which could, then your intellectual deficiencies are far too great to be solved in an Internet debate.

John Maynard Smith rejected group selection in the latter sense, feeling it to be unlikely to ever occur. He was one of the greats of biology in this century. Richard Dawkins rejects group selection as well. He is one of the preeminent zoologists alive. You are accusing both of them of disbelief in evolution. You arrogant swine.

No, you are a lying sack of shit. They rejected NON-EVOLUTIONARY group selection as an explanation for altruism, not evolutionary group selection. I never said anything about altruism being non-evolutionary; I used altruism as an example of how social beneficial traits can evolve. Yet another gross distortion on your part.


In addition, Dawkins's selfish genetics is built around demonstrating how social behaviors like altruism can develop from the individual selection of genes, negating the need for group selection to explain the development of social animals. I'm a physics undergrad (I say, knowing that this opens up entirely new avenues for you to dismiss me) whose formal study of biology has been confined to the high school level, and yet I still have a greater grasp of biology than you. Consider the plank in thy own eye before pointing out the motes in others in the future.

See above, moron. You obviously read something like this. But if you did, then you should know that Dawkins only objects to the idea of group selection not involving genetic mutation as a mechanism to explain instinctive altruism, ie- non-genetic behavioural group selection as an alternative to evolution. He is not saying that we cannot mimic evolutionary processes and create social structures whose fitness can be determined in the same way, moron. Once again, you demonstrate your amazing capacity to misrepresent, bullshit, and then pat yourself on the back for #winning.

I grow seriously tired of your misrepresentations. Let's see: first you said I espouse "objective morality" even though my very first post said the exact opposite. Then you said that I was promoting some kind of New Age "collective consciousness" because I said that groups can have collective interests (hint: collective interest and collective consciousness are entirely different things, and I can't believe that you confused the two by accident). Now you're saying that I never explained how we judge a system of morality to be superior, when the whole point I've been trying to make this whole time is that we need a system of morality defined by goals rather than rules, because goals allow us to test systems rather than using circular logic and judging them by their own axioms. And now you seize upon the fact that I used the words "group selection" in order to pretend that I'm going against Dawkins, even though Dawkins was using that phrase to describe something else entirely: the idea of non-genetic group selection as an alternative to evolution. Oh, and let's not forget you trying to accuse me of supporting Nazi eugenics, immediately after I explained how eugenics has historically been a failure.

EVERY goddamned thing you ever say is a distortion, a misrepresentation, some kind of strawman fallacy with a heaping of smarmy #winning self-congratulatory bullshit piled on top, and I'm sick of it. No matter how flagrant the error, you never admit to it: you just try again, with some new distortion.

I have better things to do with my time than fix hardware and software issues to keep this board running just so I can repeatedly correct your foul misrepresentations of my position. Go fuck yourself, and run off to your other troll forum to whine about what a bad man I am. I know that's what you routinely do anyway. 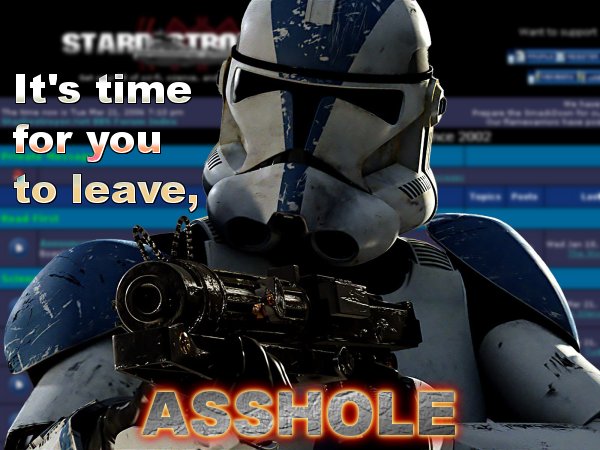 "It's not evil for God to do it. Or for someone to do it at God's command."- Jonathan Boyd on baby-killing

"you guys are fascinated with the use of those "rules of logic" to the extent that you don't really want to discussus anything."- GC

"Viagra commercials appear to save lives" - tharkûn on US health care.