GHETTO EDIT MK 2: And yes, having the lander be 30% engine by weight is kind of silly. Thing is, it's a bit difficult to imagine how else I could have gotten a lander of anything like comparable size, with a delta-V of 5000 m/s, an 'inert' payload of two tons or so, and the ability to take off and land on the Mun without difficulty.
This space dedicated to Vasily Arkhipov
Top

So I just installed the Interstellar Mod, which allows you to build a large number of theoretical and mostly impossible engine designs in the late game, and was amused to find the EM drive as one of the possible components. Though the violations of physics are much less of an issue given that it also features an Alcubierre drive as the final objective as well.

As a side note, I have lately found that it is almost easier to learn how to fly rockets in career mode, as the limited number of parts works with the skill cure much more nicely than sandbox mode in which it is too easy to get distracted with tech that is both more advanced and harder to use properly.
Top

Adam Reynolds wrote:As a side note, I have lately found that it is almost easier to learn how to fly rockets in career mode, as the limited number of parts works with the skill cure much more nicely than sandbox mode in which it is too easy to get distracted with tech that is both more advanced and harder to use properly.


I'd say that science sandbox is the best tutorial mode. Same tech tree, but no worries about money, so you can crash or blow up as many times as needed to learn without any downside.
Top

If you start out knowing a fair amount about rockets so that you can design rockets that are vaguely sort of the right size and shape and all... Then you can start out in Career Mode without too much difficulty.

But it's not something you'd want to do if you're starting without preconceptions about what "a rocket" looks like. Or if your preconceptions don't match what real rockets are like.
This space dedicated to Vasily Arkhipov
Top

BDB is finally getting to skylab, and the development releases even let you do wetworkshops. You do need wildbluetools however. PM me if anyone is interested.
"I believe in the future. It is wonderful because it stands on what has been achieved." - Sergei Korolev
Top 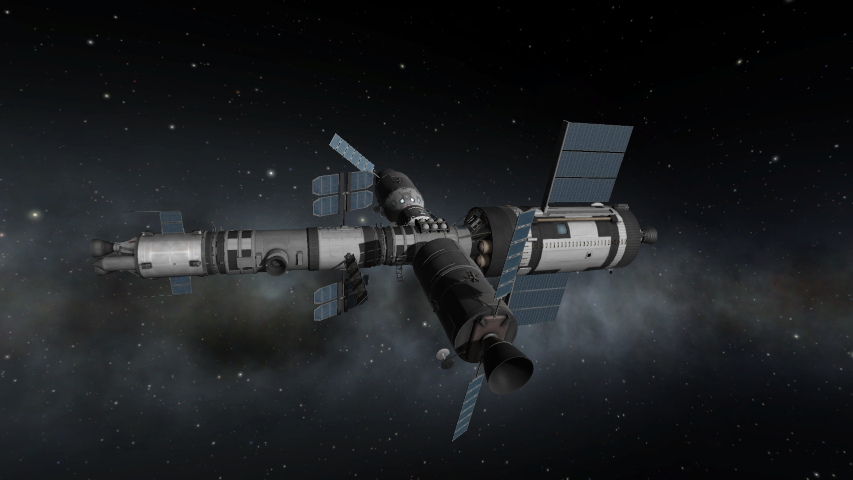 Wet workshops!
"I believe in the future. It is wonderful because it stands on what has been achieved." - Sergei Korolev
Top

Pro-tip: Shutting down your engines doesn't reset the staging.

Been messing around with planes and an early successful design had 4 engines mounted on pylons under the wings. (You can see where this is going).

Did some flying about and decided to land on the grasslands and EVA for some science before bringing it home. Landed successfully and then shut down the engines before going walk about.

Got back in, throttled up and hit space to fire my engines again aaaaand they promptly fell off followed by me hanging my head.
Top

KSP 1.4 and the DLC come out later this month. In preparation for that, I present my recommended mods for 1.3.1:

I've played a number of different KSP mods, and I'd like to recommend a few:

Historical:
BlueDog Design Bureau:
BDB is based around providing the parts needed to fly pre-shuttle US space launchers, and some of the 1960s probes. Included is Mercury/Redstone/Atlas, Gemini/MOL/Titan, Apollo/Skylab/Saturn, and many others. BDB, like many of the other mods on this list, are done in what is called a 'Porkalike' style, so named after the KSP developer Porkjet, who came up with a cohesive style for all of the spaceplane parts that are in game.
X20:
A subsidiary of BDB, focuses on providing a usable X-20 that integrates with BDB. Currently in development, but flyable (needs landing gear and adapters).
Surface Experiments Pack:
Ground science experiments to make it worthwhile to visit bodies of the Kerbol system. Requires KIS/KAS.
Tundra Exploration:
Like SpaceX? Tundra adds SpaceX

Tantares:
What BDB is to the American Space Program, Tantares is the to the Soviet one. Full of parts needed to fly Soyuz, Zond, Salyut, & Mir missions, and with R-7, N-1 & Proton rockets, Tantares is very good for your inner Soviet Cosmonaut.
Vostok Continued:
When the developer of Tantares dropped Vostok from his mod, another user picked it up and ran with it.
Tantares in Colors:
Stock Tantares is rather grey. This opens up a wider color pallet.

Cormorant Aeronology:
Shuttles! CA adds Kerbal-alike versions of the US space shuttles with both SSRMs and LRBs. Also included are parts for the Block II orbiter, and Buran (without Energia at this time). Fits with BDB's Centaur G' nicely. Soon to have Soviet LKS and US IUS.

Coatl Probes Plus!:
Offering the probes that BDB and Tantares don't (based around historic craft), Probes plus gives you options for filling out your uncrewed program.

Commonwealth Rockets/British Rocket EXpansion and Integration Technologies:
BREXIT gives the player the few British rockets that were built and were proposed. By the same people that made BDB and Tantares.

At this point, we get away from historical rockets, and start getting in to near-future items:
Stockalike Spacestation Parts Redux:
Offering a bridge between stock and Nertea's Near Future and related mods, SSPXr includes inflatables, large (3.75m) and small (1.25m) station parts. I find myself using SSPRx to give some pizazz to my Freedom-esque stations.

Kerbal Planetary Base Systems:
At some point you want to do more than just fly around in space, and this is where KPBS comes in. It offers the player the ability to design, fly and land modular outposts. Excellent textures and IVA views.

Grounded! Modular Vehicles:
Around KSC there are a number of vehicles (all date back many years to the work of Bac9, the guy who designed all of the late game buildings) as static objects. Sometimes however you may feel the need for a ground race, and Grounded offers that, without the size of FUR. Note that FUR and Grounded! play very nicely with each other, and sort-of work, even with two different design aesthetics.

Airplane Plus:
Racing is all well and good, but sometimes you want to fly under the bridge in the science center, or just have more options for flying around Kerbin and Laythe. This gives you that, while looking good to boot.

Non-Parts Mods:
Kerbal Joint Reinforcement:
While some may find the spaghetti rockets fun, many don't, and of those, many don't find having to auto-strut all of the parts together anything but annoying. KJR does that for you.

KSP Trajectory Optimization Tool:
Ever wanted to fly an Eve-Kerbin-Kerbin-Jool set of Gravity assists? KSPTOT is the mod for you. Uses the Matlab runtime to generate flight trajectories that can be imported back into the game.

Kerbal Engineer Redux or Dmagic's Basic mods or Mech Jeb:
KSP doesn't include features such as a DeltaV calculator on the fly, so either of these mods will do it for you. MechJeb also has advanced integrated auto-pilot capabilities.

Kopernicus:
Kerbals are about .62-.64 times the size of humans (linearly). When you apply that measure to Kerbal rockets, they are over-scaled relative to their system (ie a Saturn V needs no third stage to throw a CSM/LM to the moon). Kopernicus is the base mod for changing the Kerbol system, and lets you scale the system up. I use a 2.5x scale most of the time. While it makes the game harder, it also adds a slightly greater sense of accomplishment.

Real Plume:
KSP's rocket exhaust effects are bad. Real Plume makes them better.
"I believe in the future. It is wonderful because it stands on what has been achieved." - Sergei Korolev
Top

If anyone other than me is still playing KSP, a new mod dropped a couple of days ago called Restock. The goal of restock is to bring all of the parts into a uniform visual style and texel density while not impacting the actual part physics or utility.
"I believe in the future. It is wonderful because it stands on what has been achieved." - Sergei Korolev
Top

I'll probably come back post DLC for a bit but I haven't followed the mod scene at all.
Top

Squad has released images of the DLC that will be released at the end of the month. Included with be a new 'futuristic' suit for your Kerbals, Stock robotic parts (hinges, rotors, rotational servos, and pistons), and a new inventory system that will allow for the deployment of science experiments on the surface of the various bodies. You'll need electricity for this, but the screencaps show deployable solar arrays and RTGs, and power transmission is going to be wireless. I expect that this will replace KIS for a lot of things as the functionality is going to be built into the game, but the parts will be DLC (allowing moders to make their own parts using these systems).
"I believe in the future. It is wonderful because it stands on what has been achieved." - Sergei Korolev
Top

Thanks to Precise Node, my old (version 1.0.5) two kerbal lander has been revamped, this time with the CoG within a tenth of a milimeter of the center of the cabin, and thus inline with the docking port, RCS jets and engines
"I believe in the future. It is wonderful because it stands on what has been achieved." - Sergei Korolev
Top

If you want to buy the base game on Steam, it's down to $9.99, and the first DLC (Making History) is half off ($7.49).
"I believe in the future. It is wonderful because it stands on what has been achieved." - Sergei Korolev
Top
Post Reply
588 posts