SARAH PALINDROME IS BACK ON THE MARKET BOYS

SARAH PALINDROME IS BACK ON THE MARKET BOYS


Todd Palin appears to have filed for divorce from former Alaska governor and one-time vice-presidential candidate Sarah Palin, his wife of 31 years.

In a document filed Friday in Anchorage Superior Court, Todd Palin, 55, asked to dissolve the marriage, citing an “incompatibility of temperament between the parties such that they find it impossible to live together as husband and wife.”

The divorce filing uses initials rather than full names, but identifies the couple’s marriage date and the birth date of their only child who is a minor, Trig Palin. The filing asks for joint legal custody of the child.

Anchorage attorney Kimberlee Colbo is representing Todd Palin in the divorce. In a filing, Colbo said she would ask the court to designate the divorce confidential as it moves forward.

Colbo did not immediately respond Monday to a request for comment from Todd Palin.

The Palin family rocketed to national prominence in 2008 when Republican presidential nominee John McCain chose Palin as his vice-presidential candidate, making them household names and focusing the country’s attention on their hometown of Wasilla.

The marriage of Sarah and Todd, a commercial fisherman, snowmachine racer and oil field worker, was frequently on display in TV interviews, reality shows, books and other media appearances.

Palin resigned as governor in 2009.

Since leaving office, Sarah Palin has kept a low profile in Alaska politics, while maintaining a national profile through her books, speaking engagements and social media presence.

"If scientists and inventors who develop disease cures and useful technologies don't get lifetime royalties, I'd like to know what fucking rationale you have for some guy getting lifetime royalties for writing an episode of Full House." - Mike Wong

"The present air situation in the Pacific is entirely the result of fighting a fifth rate air power." - U.S. Navy Memo - 24 July 1944
Top

Re: SARAH PALINDROME IS BACK ON THE MARKET BOYS

My dear estranged mother must be going nuts about this, before she cut off all contact she spent her nights in 2016 haunting Sara Palin conspiracy blogs. This will no question be covered there as part of the secret Republican conspiracy to cover Palin various crimes both real and imaginary. Mostly the imaginary because the real stuff is never sexy enough for a conspiracy theorist.


But then since 2016 she's been radio silent so I imagine aside from the headline former Governor Palin is basically done at this point.
"A cult is a religion with no political power." -Tom Wolfe
Pardon me for sounding like a dick, but I'm playing the tiniest violin in the world right now-Dalton
Top

Re: SARAH PALINDROME IS BACK ON THE MARKET BOYS

I never got the drooling attention she got, and I have quite a lot of knuckle-dragging horndog cred, if I say so myself. Not that it matters: She is vile, whether it's the crude racism or inciting death threats (no wonder her speeches were co-written by the ghost of Westbrook Pegler) and should could be a clone of Eva Green and I'd pass. Her biggest accomplishment was making Joe Biden look like a statesman: 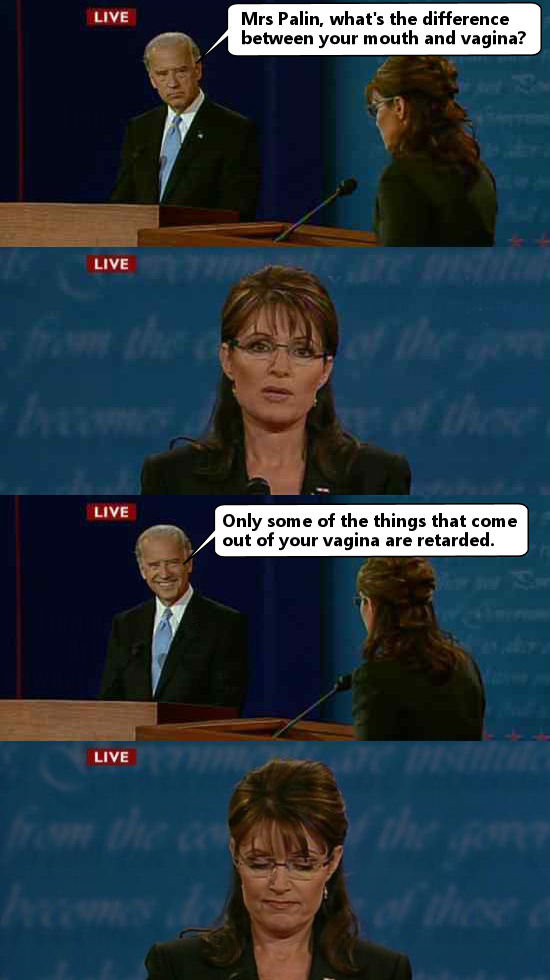 "One way we recognize a mass hysteria movement is that everyone who doesn’t believe is accused of being in on the plot. This has been going on virtually unrestrained in both political and media circles in recent weeks."